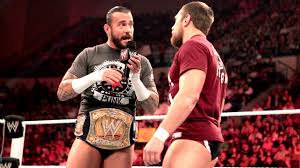 Arguably one of the most universally-known catchphrases belongs to John Cena. When he says, “You Can’t See Me!”, it sends chills down the spines of opponents and fans. Cena has captivated audiences all over the world for over 15 years. Cena has the ability to cut a promo that was pre-written or thought of off the top of his head. Nearly everybody Cena had a heated rivalry with, they ended up in a war of words every week. Cena is one of the only people that the WWE trusts to speak freely at any point in the night. On the night of May 1, 2011, Cena had defeated The Miz and John Morrison in a Steel Cage match for the WWE Championship at the Extreme Rules pay-per-view. After the match, Cena infamously and patriotically announced the killing of Osama bin Laden. That following year, The Rock and John Cena cemented Cena’s legacy of being an unbelievable talker throughout one of the most heated and historic rivalries of the 2010’s. The rivalry went over so well and drew so much heat, it lasted two years culminating with John Cena defeating The Rock at WrestleMania 29 for the WWE Championship. The next night and for the many years to come, Cena let everybody know that “The Champ is Here!”. Ultimately, Cena will go down as one of the best performers and talkers.

For the greater part of the 2000’s, CM Punk was a rising star just waiting to jump on the opportunity to be the face of the company. By 2011, Punk had been an ECW Champion, a World Tag Team Champion, an Intercontinental Champion, a 2-time Money in the Bank winner, and a 3-time World Heavyweight Champion. Come June 27, 2011, CM Punk sat on the stage of Monday Night Raw, while his then-rival and WWE Champion, John Cena, was recovering in the ring from his match. Punk delivered one of the greatest promos of all-time. To this day, nobody knows if it was pre-written or delivered on the spot. Punk broke so many unwritten rules of WWE. He referenced other companies, friends and family. He verbally attacked the entire WWE in 10 minutes. Three weeks later, Punk defeated Cena for the WWE Championship, despite his contract expiring that night. After that victory, Punk grabbed everybody’s attention every time he grabbed a microphone. Throughout CM Punk’s 434-day reign as WWE Champion, he stole the show every single time he was talking or performing. Despite leaving the WWE on awful terms, he will still go down as one of the best talkers of this generation.

The man known as the “Legend Killer” and “The Viper”, Randy Orton, has slithered his way to the top of the WWE since his debut in 2002. Being a member of Evolution at such a young age with then-fellow newcomer, Batista, and two of the greatest performers of all-time, Ric Flair and Triple H, Orton was destined for greatness. In 2004, Orton became the youngest World Heavyweight Champion of all-time. But that was only the beginning of a legendary career. Orton’s popularity skyrocketed when he became the “Legend Killer”. Orton was verbally, mentally and physically abusing his legendary opponents from the likes of Shawn Michaels to Mick Foley to even Harley Race. Orton’s 17-year path of destruction caused by the “voices in his head” has created one of the greatest legacies in WWE history. Mr. RKO himself has always been able to play mind games with any of his opponents. He has done everything from insulting families to the personal demons of his opponents and has never failed to get under the skin of the WWE Universe.

When entering the WWE in 2006, The Miz had a very interesting advantage when talking to the WWE Universe. The Miz was originally on the MTV show, The Real World, where he actually revealed his character, “The Miz”, for the first time. The Miz had a very bumpy road to the top as he was outcasted by the locker room, but he never let that stop him. From the “Chick Magnet” to the “A-Lister” he is today, The Miz has never stopped grabbing audience’s attention when he has a microphone in his hands. In late 2016 when WWE decided to split the rosters of Smackdown Live and Raw, The Miz found himself on Smackdown Live. At the time, a post-show called, “Talking Smack”, would air every week after Smackdown Live on the WWE Network. The Miz found himself in what was one of the greatest shoot promos of this generation. He ripped into long-time rival and then-General Manager, Daniel Bryan. People were taken back by how vicious his promo was. In 2017, The Miz and his wife, Maryse, were in a heated rivalry with John Cena and his former fiance, Nikki Bella. Miz and Maryse abused Cena and Bella’s personal life. The Miz and Maryse were so well liked during their time on Total Divas, that they received their own spin-off reality show, Miz and Mrs. The Miz has done nearly everything there is in WWE, and he is not done yet.

Hmmmm, where do I even begin? Daniel Bryan’s run from late 2013 to 2016 is arguably one of the greatest rises to stardom for a superstar. Bryan was always thought of as a “B+ player” according to the McMahon family. Bryan was overlooked year after year and he had finally had enough. Since his first World Heavyweight Champion run in late 2011 and early 2012, Bryan has been chanting “Yes! Yes! Yes!” (and occasionally “No! No! No!”) all over the world. At the 2014 Royal Rumble, fans had been cheering for Bryan in matches he wasn’t in and booing the competitors of that match. WWE fans grew enraged and began boycotting WWE until Daniel Bryan was given the respect he deserved. On March 10, 2014, Bryan did one of the most memorable things on Raw in the history of the show. Gaining fans by the second through his “Yes! Movement”, he decided to “occupy” Raw. Bryan filled the ring with fans of the WWE Universe and refused to leave, resulting in an infuriated Triple H agreeing to Bryan’s demand for a match at WrestleMania XXX. However, a stipulation was set that the winner would be inserted into the WWE World Heavyweight Championship match at the “Show of Shows”. Bryan would defeat Triple H in the opening match of WrestleMania XXX and eventually defeated Randy Orton and Batista by submission when he applied the “Yes! Lock” to Batista in the middle of the ring. The power of the “Yes! Movement” alone is the true sign of why Daniel Bryan is one of the most captivating and influential talkers in WWE history.